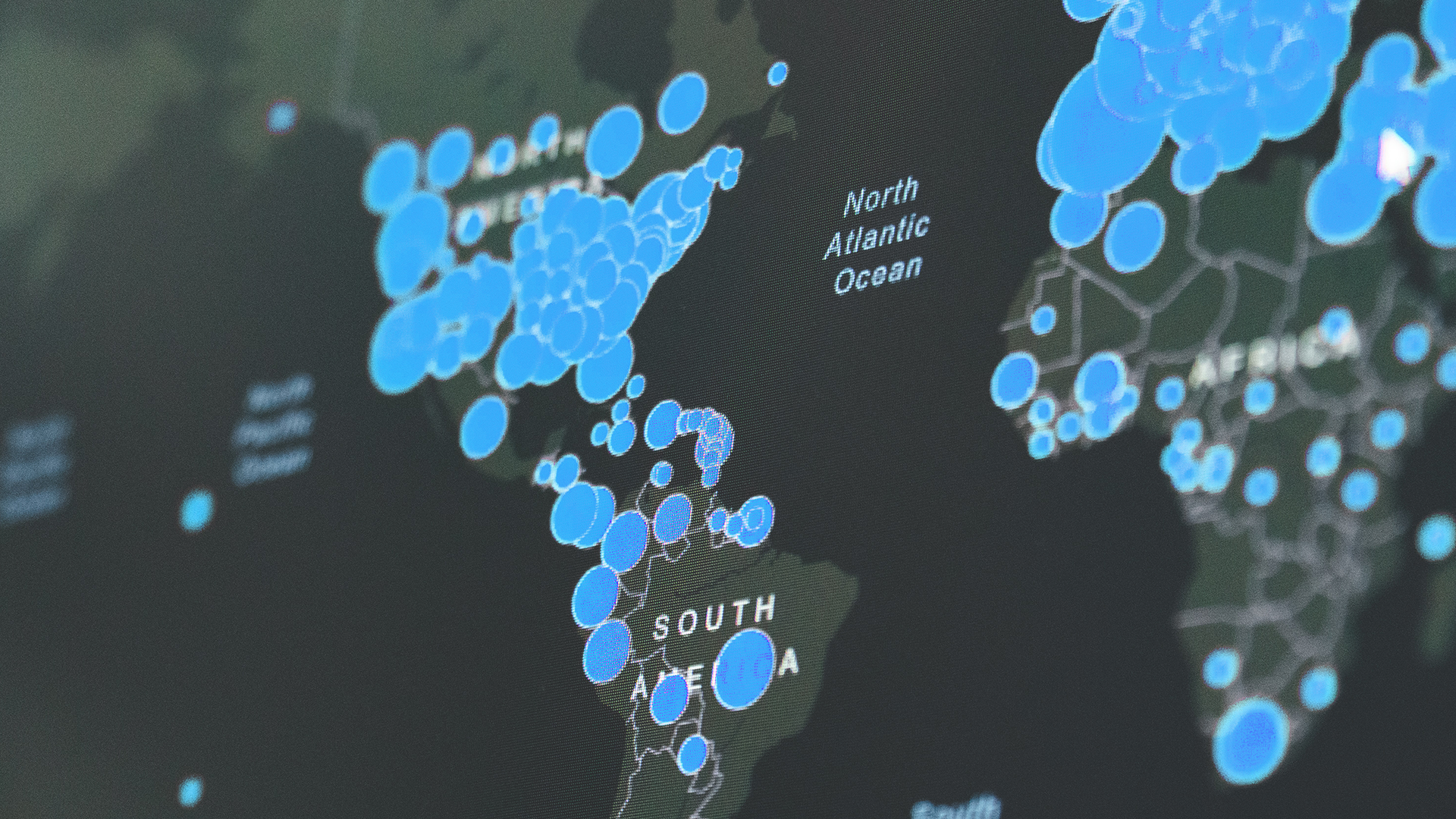 Organizations are scrambling to respond to the ‘new normal’—shifting services online, weathering traffic surges, and supporting newly remote workers. Based on observed attack data, we have seen that this scramble—and the increasing importance of the Internet to our daily lives—presents attackers with an opportunity to increase their malicious activity.

This report shows the data behind this trend and offers suggestions on how to respond.

Based on attack data observed from April to June of 2020, Cloudflare has identified the following trends:

DDoS attacks that target Layer 3 and 4—also known as the Network and Transport layers of the OSI model—use functions in those two layers (e.g. server pings in Layer 3 and TCP SYN packets in Layer 4) to overwhelm a targeted server with junk traffic.

In analyzing Layer 3/4 DDoS attacks, we saw the number of attacks spike sharply in April, May, and June. May and June alone accounted for over 50% of all Layer 3/4 attacks this year: 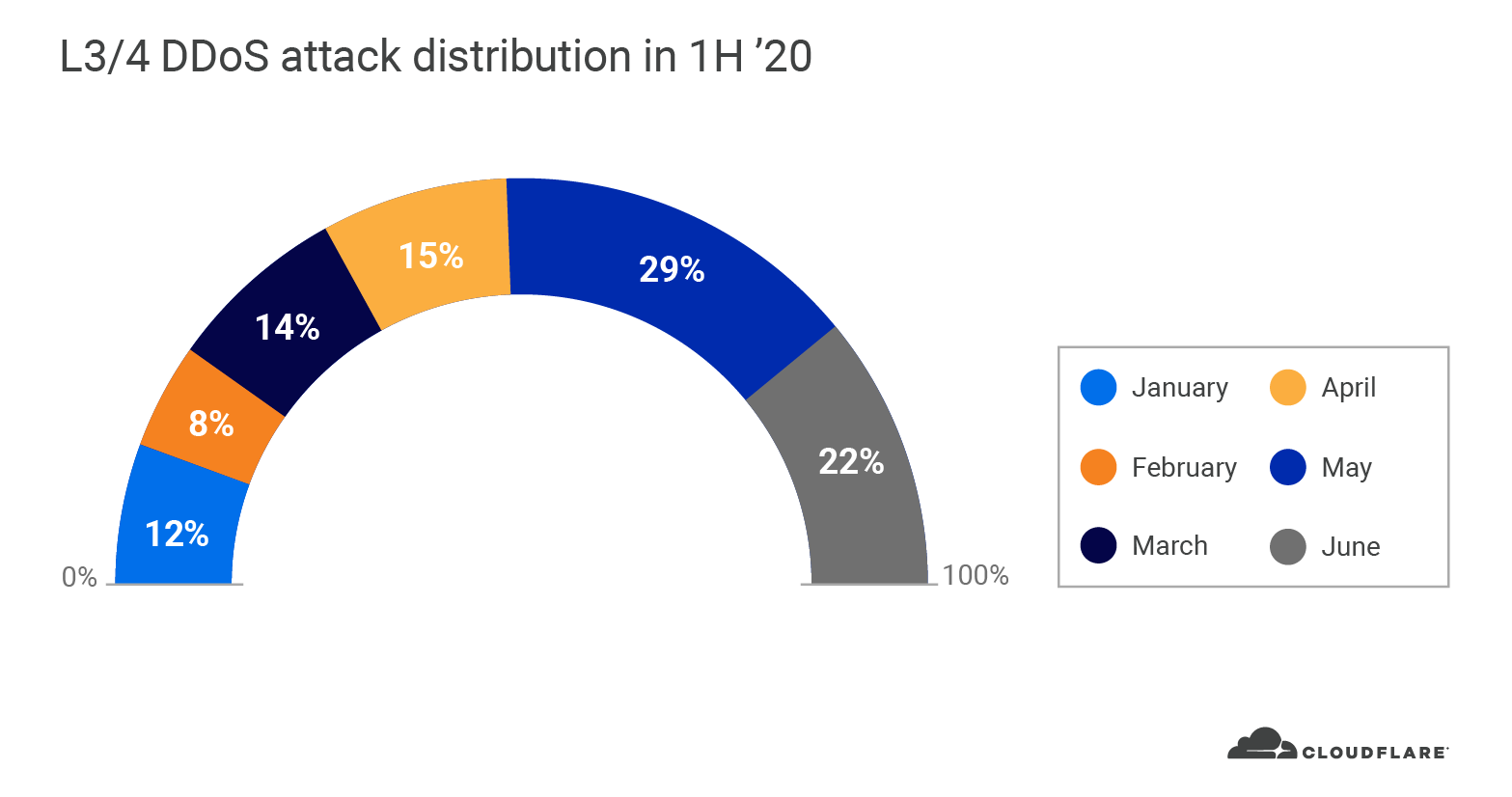 This period also saw some of the largest attacks. The largest attack category Cloudflare evaluated was those delivering over 100 Gigabits-per-second (Gbps) in attack volume. Of all the 100+ Gbps attacks to have occurred in Q2 2020, 63% of them took place in May—a significant surge in large attacks compared to Q1. 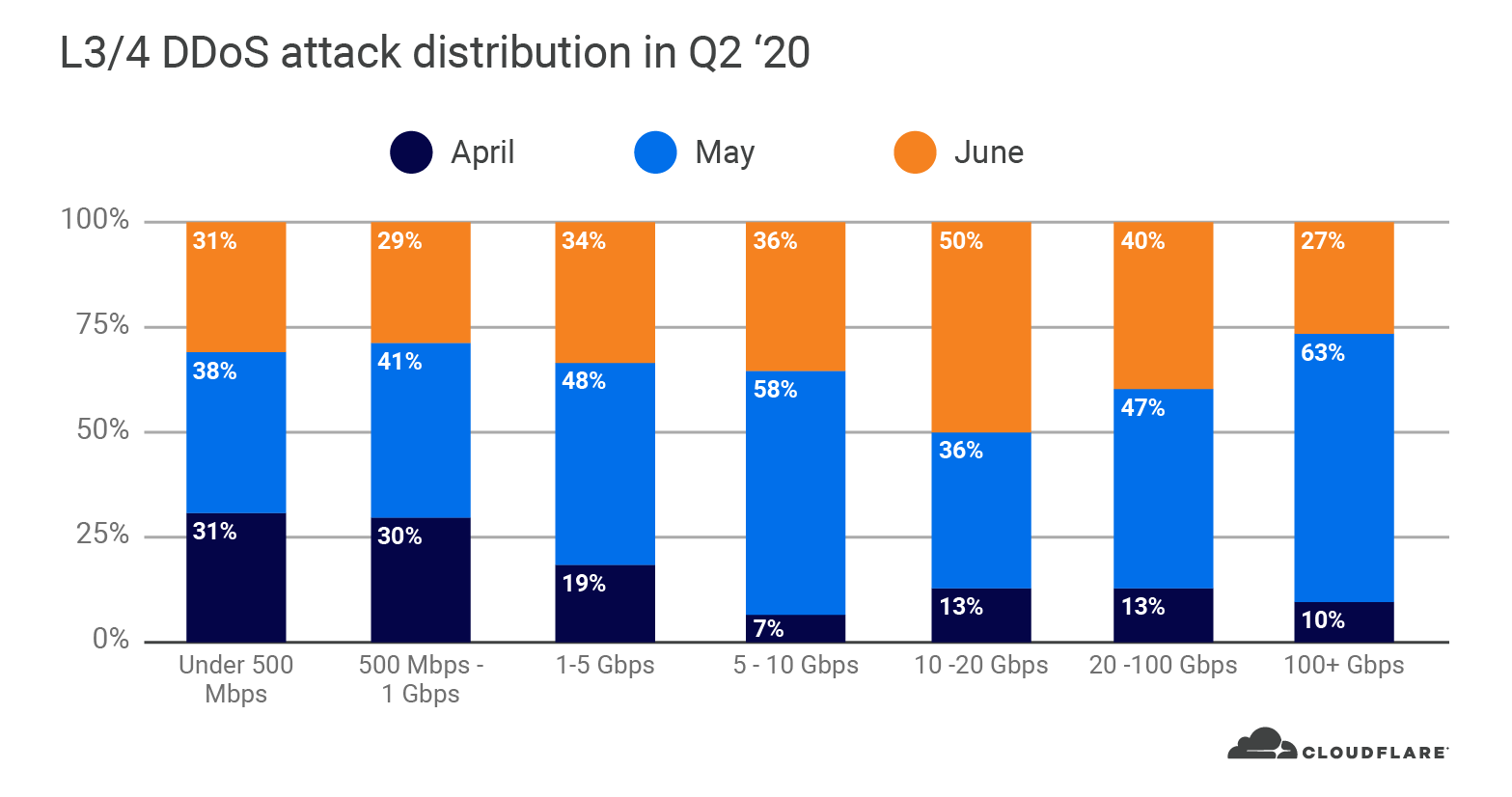 There are different ways of measuring a DDoS attack’s size. One is the volume of traffic it delivers, measured in bit rate (specifically, Gigabits-per-second). Another is the number of packets it delivers, measured in packet rate (specifically, packets-per-second). Attacks with high bit rates attempt to saturate the Internet link, and attacks with high packet rates attempt to overwhelm the routers or other in-line hardware devices. 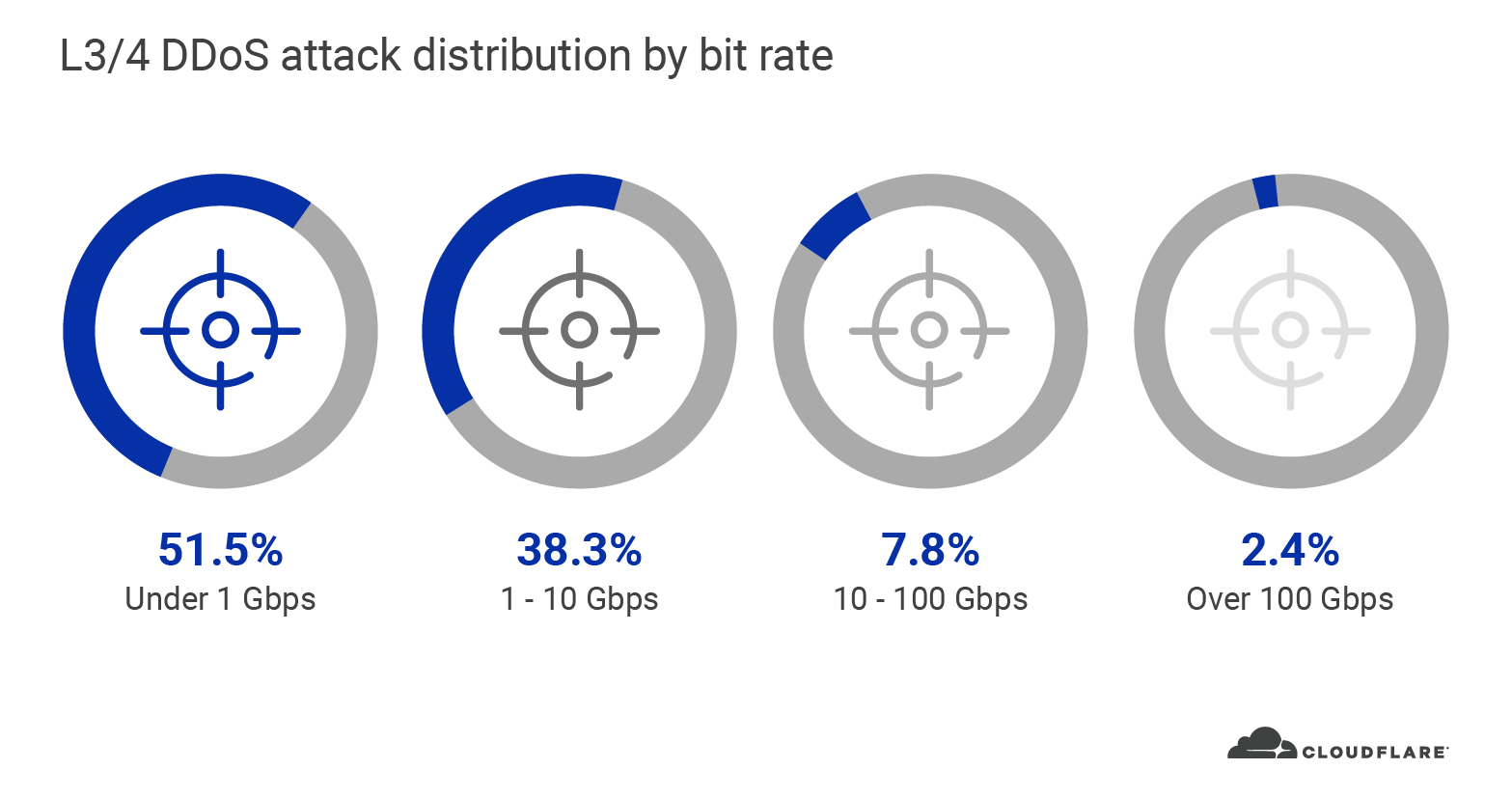 Similarly, approximately 76% of all attacks had packet rates of under one million pps - a comparatively low threshold. : 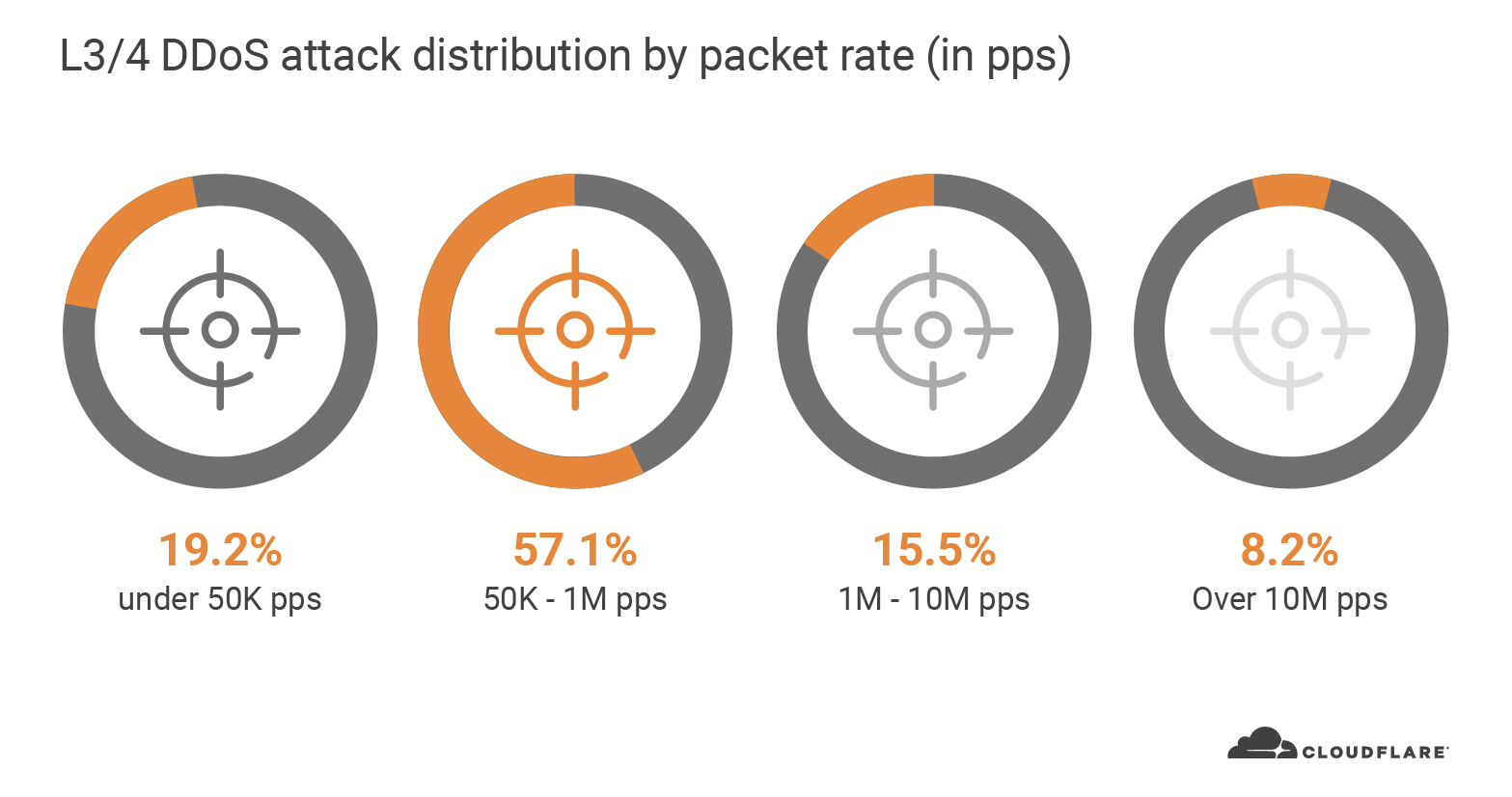 The United States saw the most Layer 3/4 DDoS attacks 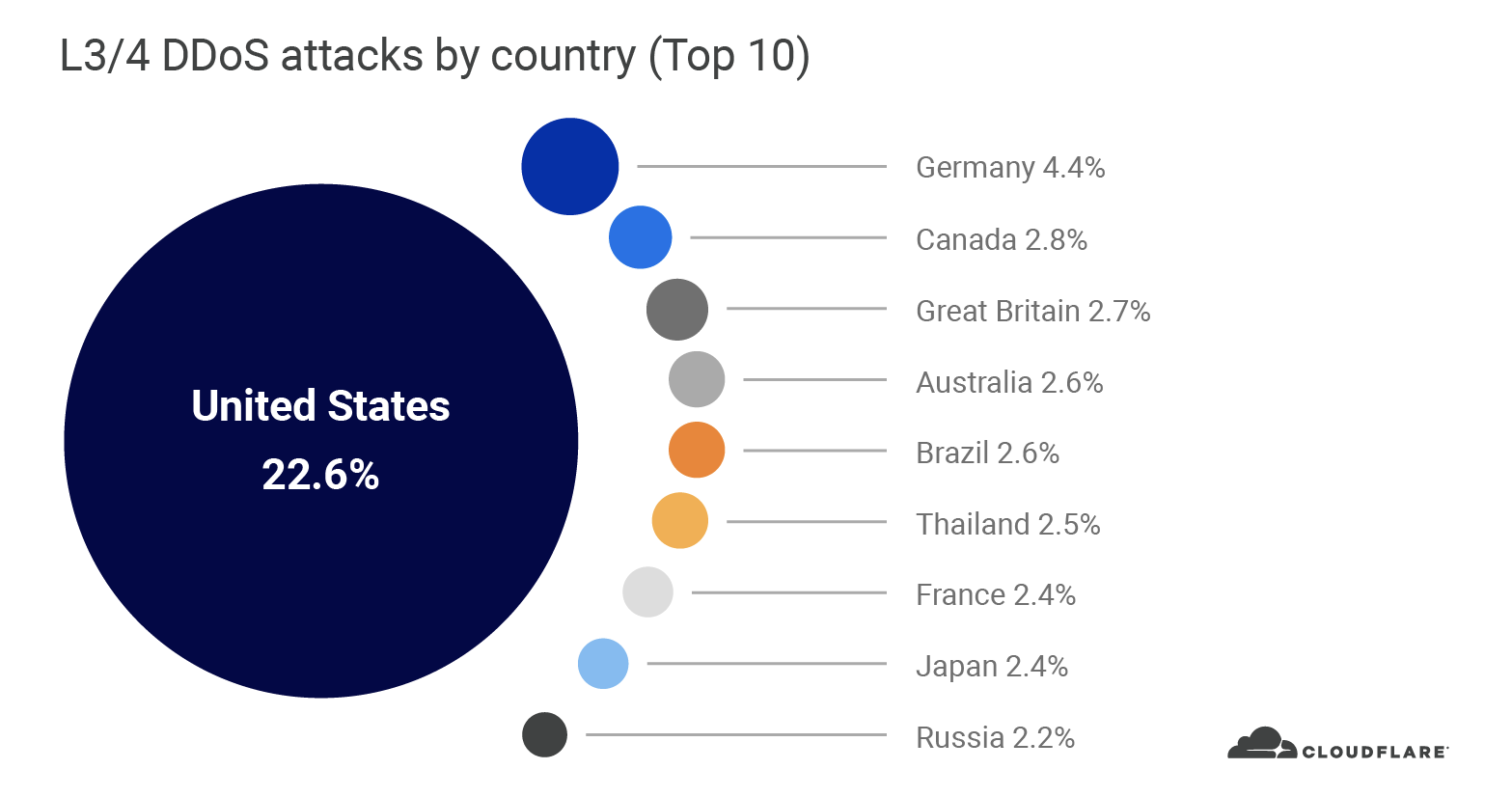 How organizations can respond to these trends

Based on these trends, we can draw the conclusions below. We also offer recommendations on how to respond:

A large cloud-based network is the only truly viable answer for all of these challenges. It puts DDoS protection on a single control plane at the network edge to stop attacks as close to their source as possible — so origin servers remain safe and secure whether they’re located on-premise or in the cloud. And its size allows it to distribute attack traffic across a large network surface, so no one data center bears the brunt and suffers from worse performance.

These findings were drawn from the Cloudflare network, which spans 200200+ cities in 100100+ countries while blocking over 72 billion cyber threats per day. Because of our unique 360-degree view across the DDoS threat landscape, Cloudflare is able to collect a wealth of data about these pervasive attacks as they evolve. The Cloudflare network learns continuously from every attack while automatically sharing intelligence to thwart the next attack. And it delivers robust DDoS security across your enterprise without slowing network and application performance.

Dive deeper on this topic and explore more data on DDoS trends—including the prevalence of different attack vectors—and learn how certain companies have handled similar threats in the full data report.