Bot management involves identifying and blocking some bots from a website or application, while still allowing access to other bots.

What is bot management? 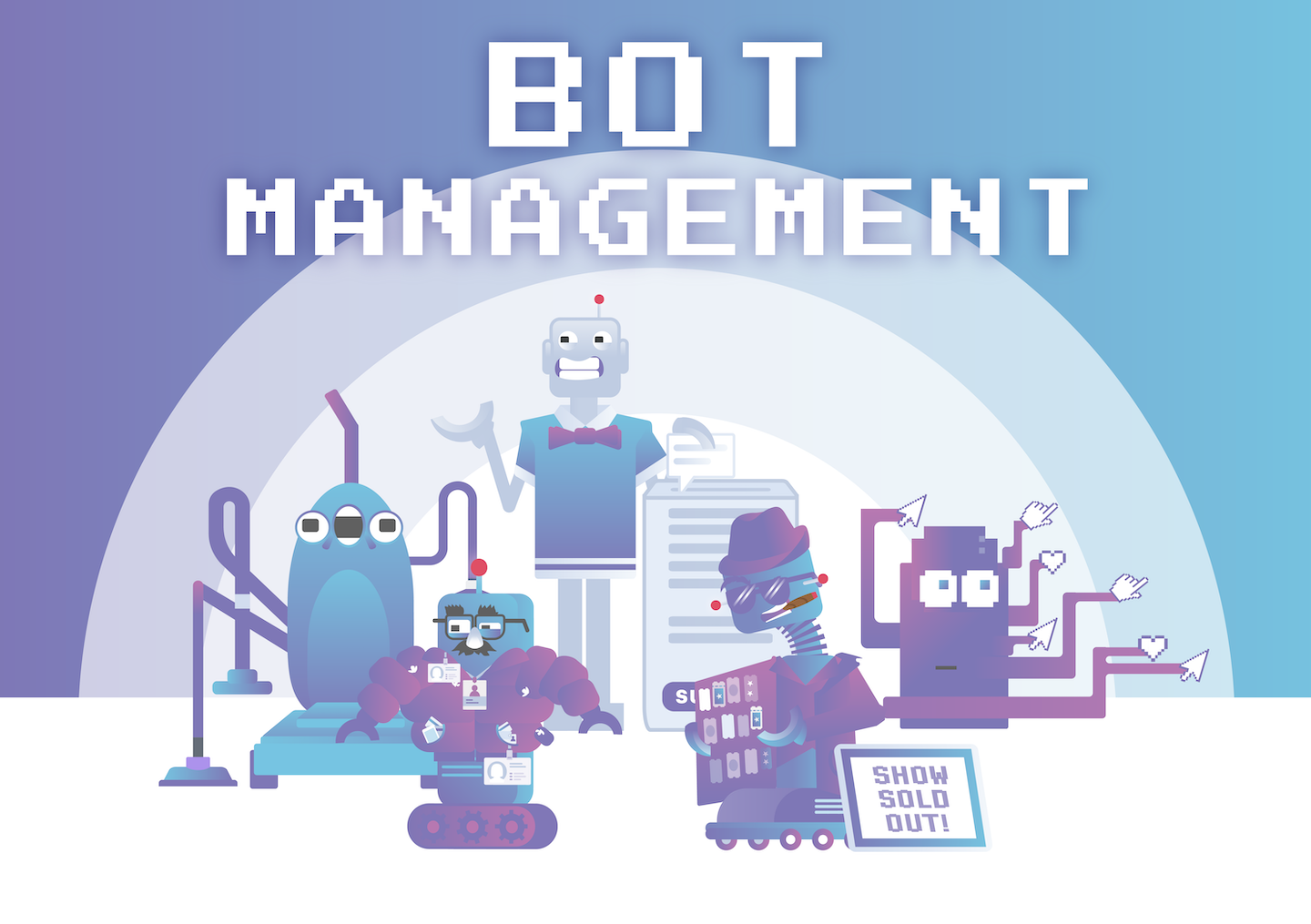 Bot management is necessary because bots, if left unchecked, can cause massive problems for web properties. Too much bot traffic can put a heavy load on web servers, slowing or denying service to legitimate users (sometimes this takes the form of a DDoS attack). Malicious bots can scrape or download content from a website, steal user credentials, rapidly spread spam content, and perform various other kinds of cyberattacks.

What does a bot manager do?

A bot manager is any software product that manages bots. Bot managers should be able to block some bots and allow others through, instead of simply blocking all non-human traffic. If all bots are blocked and Google bots aren't able to index a page, for instance, then that page can't show up in Google search results, resulting in greatly reduced organic traffic to the website.

A good bot manager accomplishes the following goals. It can:

A bot is a computer program that operates on a network. Bots are programmed to automatically do certain actions. Typically the tasks a bot performs are fairly simple, but a bot can do them over and over at a much faster rate than a human could.

For instance, Google uses bots to constantly crawl webpages and index content for search. It would take an astronomical amount of time for a team of humans to review the content spread out across the Internet, but Google's bots are able to keep Google's search index fairly up-to-date.

Unlike when a human user accesses the Internet, a bot typically does not access the Internet via a traditional web browser like Google Chrome or Mozilla Firefox. Instead of operating a mouse (or a smartphone) and clicking on visual content in a browser, bots are just software programs that make HTTP requests (among other activities), typically using what’s called a "headless browser."

What do bots do?

Bots can do essentially any repetitive, non-creative task – anything that can be automated. They can interact with a webpage, fill out and submit forms, click on links, scan (or "crawl") text, and download content. Bots can "watch" videos, post comments, and post, like, or retweet on social media platforms. Some bots can even hold basic conversations with human users – these are known as chatbots.

What is the difference between good bots and bad bots?

Amazingly, many sources estimate that roughly half of all Internet traffic is bot traffic. Just as some, but not all, software is malware, some bots are malicious, and some are "good."

Any bot that misuses an online product or service can be considered "bad." Bad bots can range from the blatantly malicious, such as bots that try to break into user accounts, to more mild forms of resource misuse, such as bots that buy up tickets on an events website.

A bot that performs a needed or helpful service can be considered "good." Customer service chatbots, search engine crawlers, and performance monitoring bots are all examples of good bots. Good bots typically look for and abide by the rules outlined in a website's robots.txt file.

What is a robots.txt file?

Robots.txt is a file on a web server outlining the rules for bots accessing properties on that server. However, the file itself does not enforce these rules. Essentially, anyone who programs a bot is supposed to follow an honor system and make sure that their bot checks a website's robots.txt file before accessing the website. Malicious bots, of course, typically do not follow this system – hence the need for bot management.

How does bot management work?

To identify bots, bot managers may use JavaScript challenges (which determines whether or not a traditional web browser is being used) or CAPTCHA challenges. They may also determine which users are humans and which are bots by behavioral analysis – which means by comparing a user's behavior to the standard behavior of users in the past. Bot managers must have a large collection of quality behavioral data to check against in order to do the latter.

If a bot is determined to be bad, it can be redirected to a different page or blocked from accessing a web resource altogether.

Good bots may be added to an allowlist, or a list of allowed bots (the opposite of a blocklist). A bot manager may also distinguish between good and bad bots via further behavioral analysis.

What kinds of bot attacks does bot management mitigate?

A bot management solution can help stop a variety of attacks:

These other bot activities are not always considered "malicious," but a bot manager should be able to mitigate them regardless:

How does Cloudflare manage bots?

Cloudflare has the unique ability to collect data from billions of requests flowing through its network per day. With this data, Cloudflare is able to identify likely bot activity with machine learning and behavioral analysis, and can provide the data necessary for creating an effective allowlist of good bots or blocklist of bad bots. Cloudflare also has an extensive IP reputation database. Learn more about Cloudflare Bot Management.