Zero Trust is a security model based on the principle of maintaining strict access controls and not trusting anyone by default, even those already inside the network perimeter.

Zero Trust security is an IT security model that requires strict identity verification for every person and device trying to access resources on a private network, regardless of whether they are sitting within or outside of the network perimeter. ZTNA is the main technology associated with Zero Trust architecture; but Zero Trust is a holistic approach to network security that incorporates several different principles and technologies. 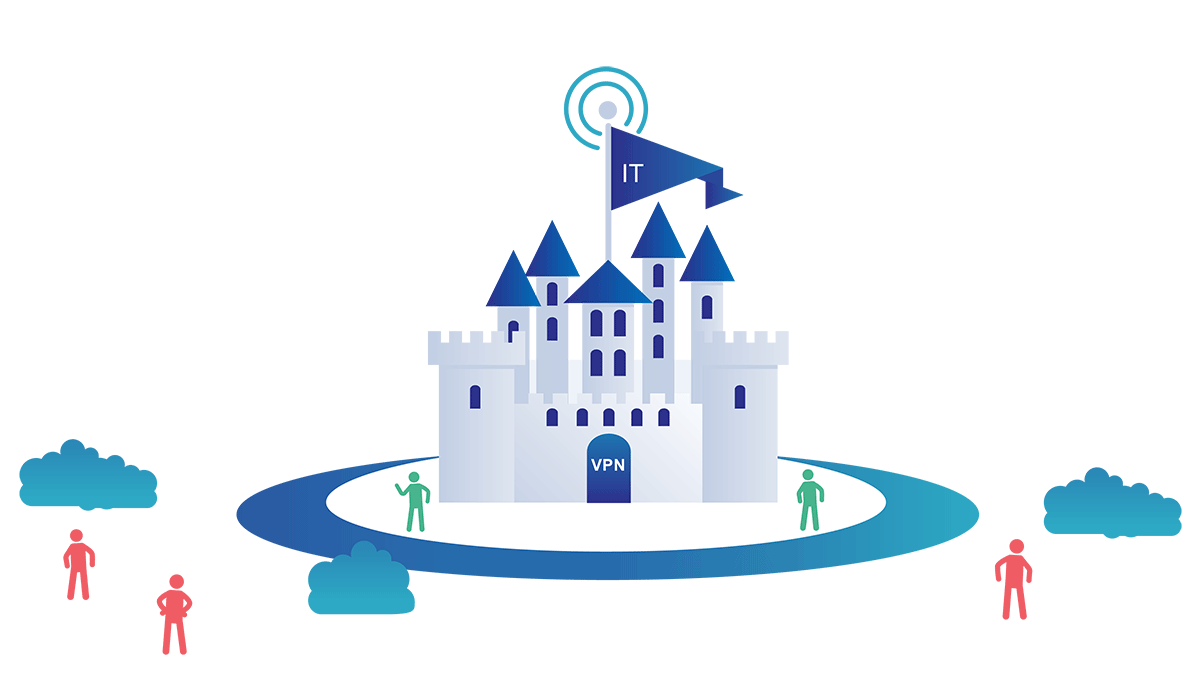 Zero Trust security means that no one is trusted by default from inside or outside the network, and verification is required from everyone trying to gain access to resources on the network. This added layer of security has been shown to prevent data breaches. Studies have shown that the average cost of a single data breach is over $3 million. Considering that figure, it should come as no surprise that many organizations are now eager to adopt a Zero Trust security policy.

What are the main principles behind Zero Trust?

The philosophy behind a Zero Trust network assumes that there are attackers both within and outside of the network, so no users or machines should be automatically trusted. Zero Trust verifies user identity and privileges as well as device identity and security. Logins and connections time out periodically once established, forcing users and devices to be continuously re-verified.

Implementing least privilege involves careful managing of user permissions. VPNs are not well-suited for least-privilege approaches to authorization, as logging in to a VPN gives a user access to the whole connected network.

In addition to controls on user access, Zero Trust also requires strict controls on device access. Zero Trust systems need to monitor how many different devices are trying to access their network, ensure that every device is authorized, and assess all devices to make sure they have not been compromised. This further minimizes the attack surface of the network.

Zero Trust networks also utilize microsegmentation. Microsegmentation is the practice of breaking up security perimeters into small zones to maintain separate access for separate parts of the network. For example, a network with files living in a single data center that utilizes microsegmentation may contain dozens of separate, secure zones. A person or program with access to one of those zones will not be able to access any of the other zones without separate authorization.

In network security, "lateral movement" is when an attacker moves within a network after gaining access to that network. Lateral movement can be difficult to detect even if the attacker's entry point is discovered, because the attacker will have gone on to compromise other parts of the network.

Zero Trust is designed to contain attackers so that they cannot move laterally. Because Zero Trust access is segmented and has to be re-established periodically, an attacker cannot move across to other microsegments within the network. Once the attacker's presence is detected, the compromised device or user account can be quarantined, cut off from further access. (In a castle-and-moat model, if lateral movement is possible for the attacker, quarantining the original compromised device or user has little to no effect, since the attacker will already have reached other parts of the network.)

Multi-factor authentication (MFA) is also a core value of Zero Trust security. MFA means requiring more than one piece of evidence to authenticate a user; just entering a password is not enough to gain access. A commonly seen application of MFA is the 2-factor authorization (2FA) used on online platforms like Facebook and Google. In addition to entering a password, users who enable 2FA for these services must also enter a code sent to another device, such as a mobile phone, thus providing two pieces of evidence that they are who they claim to be.

What is the history of Zero Trust security?

The term "Zero Trust" was coined by an analyst at Forrester Research Inc. in 2010 when the model for the concept was first presented. A few years later, Google announced that they had implemented Zero Trust security in their network, which led to a growing interest in adoption within the tech community. In 2019, Gartner, a global research and advisory firm, listed Zero Trust security access as a core component of secure access service edge (SASE) solutions.

Zero Trust Network Access (ZTNA) is the main technology that enables organizations to implement Zero Trust security. Similar to a software-defined perimeter (SDP), ZTNA conceals most infrastructure and services, setting up one-to-one encrypted connections between devices and the resources they need. Learn more about how ZTNA works.

How to implement Zero Trust security

Zero Trust may sound complex, but adopting this security model can be relatively simple with the right technology partner. For instance, Cloudflare One is a SASE platform that combines networking services with a built-in Zero Trust approach to user and device access. With Cloudflare One, customers automatically implement Zero Trust protection around all their assets and data.