What is a cryptographic key? | Keys and SSL encryption

A key is a group of random characters in a particular order. Encryption protocols use a key to alter data so that it's scrambled, and so that anyone without the key can't decode the information. 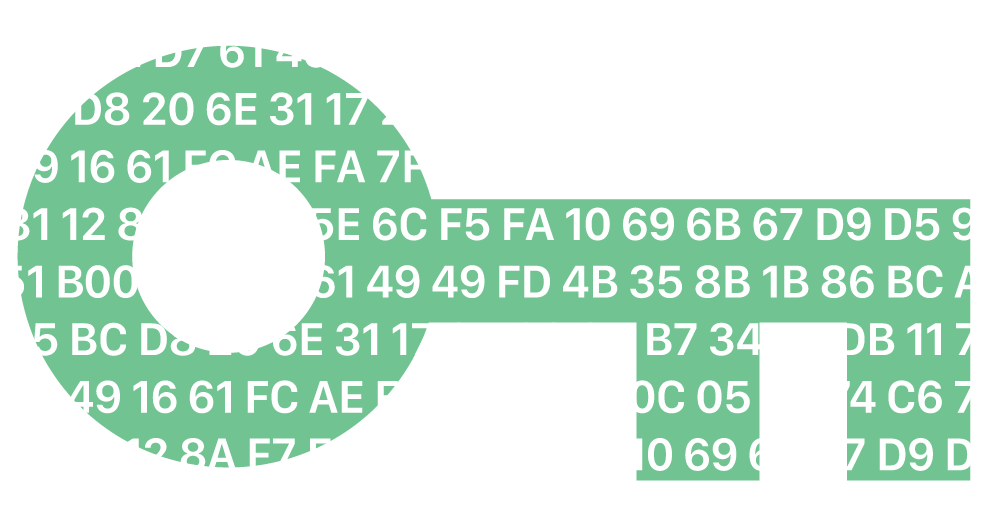 In cryptography, a key is a string of characters used within an encryption algorithm for altering data so that it appears random. Like a physical key, it locks (encrypts) data so that only someone with the right key can unlock (decrypt) it.

Keys in early forms of encryption

Before the advent of computers, ciphertext was often created by simply replacing one letter with another letter in the plaintext, a method known as a "substitution cipher." For instance, suppose that someone sends a message reading "Hello" to another person, and each letter is replaced with the one after it in the alphabet: "Hello" becomes "Ifmmp."

"Ifmmp" looks like a nonsensical string of letters, but if someone knows the key, they can substitute the proper letters and decrypt the message as "Hello." For this example, the key is (letter) - 1, moving each letter down one spot in the alphabet to arrive at the real letter.

Such ciphers are relatively easy to break with simple statistical analysis, since certain letters will appear more often than others in any given text (for instance E is the most common letter in the English language). To combat this, cryptographers developed a system called the one-time pad.

A one-time pad is a single-use-only key that has at least as many values as the plaintext has characters. In other words, each letter will be replaced by a letter that's a unique number of letters removed from it in the alphabet.

Whereas before we simply moved up one position for each letter (letter + 1), now we move a different number of places in the alphabet for each letter. We add 7 to the first letter, H; we add 17 to the second letter; and so on. For any calculations that take us past Z, we simply go back to the beginning of the alphabet and keep adding.

For communication via a one-time pad to work, both sides of the conversation have to use the same key for each individual message (symmetric encryption), although a different key is used every time there's a new message. Although to any third parties "Ovjuz" looks like random nonsense, the person who receives the ciphertext "Ovjuz" will know to use the key "7, 17, 24, 9, 11" to decrypt it (subtracting instead of adding):

Thus, a simple message can be altered by a string of random data, a key, in order to be encrypted or decrypted.

Although the above examples of early cryptography illustrate how using a random string of information to turn plaintext into ciphertext works, cryptographic keys today are far more complex.

For instance, the public key for cloudflare.com is:

Instead of simply adding or subtracting, modern encryption uses complex mathematical formulas known as algorithms. And instead of a simple string of random numbers for a key, modern keys are typically randomized even further.

This is the case for several reasons:

Combined with an encryption algorithm, a cryptographic key will scramble a text beyond human recognition.

As an example, let's encrypt the message "Hello" with the cloudflare.com public key. Using an encryption algorithm with that key, we get "KZ0KVey8l1c=" as the ciphertext. (For the technically inclined: Blowfish algorithm, CBC mode, base64 encoding.)

How are keys used in SSL encryption (HTTPS)?

SSL (or TLS, as it is called today), is an encryption protocol used to keep Internet communications secure, and a website that is served over HTTPS instead of HTTP uses this kind of encryption. In TLS/SSL, a website or web application will have both a public key and a private key. The public key is shared publicly in the website's SSL certificate for anyone to see. The private key is installed on the origin server and never shared.

TLS/SSL communication sessions begin with a TLS handshake, during which the website and the client use the public key and the private key in order to generate new keys, which are called session keys. These session keys are then used by both sides to encrypt their messages back and forth.