What is the OSI Model?

The OSI Model breaks down network communication into seven layers. These layers are useful for identifying network issues.

What is the OSI Model?

The open systems interconnection (OSI) model is a conceptual model created by the International Organization for Standardization which enables diverse communication systems to communicate using standard protocols. In plain English, the OSI provides a standard for different computer systems to be able to communicate with each other.

The OSI Model can be seen as a universal language for computer networking. It is based on the concept of splitting up a communication system into seven abstract layers, each one stacked upon the last. 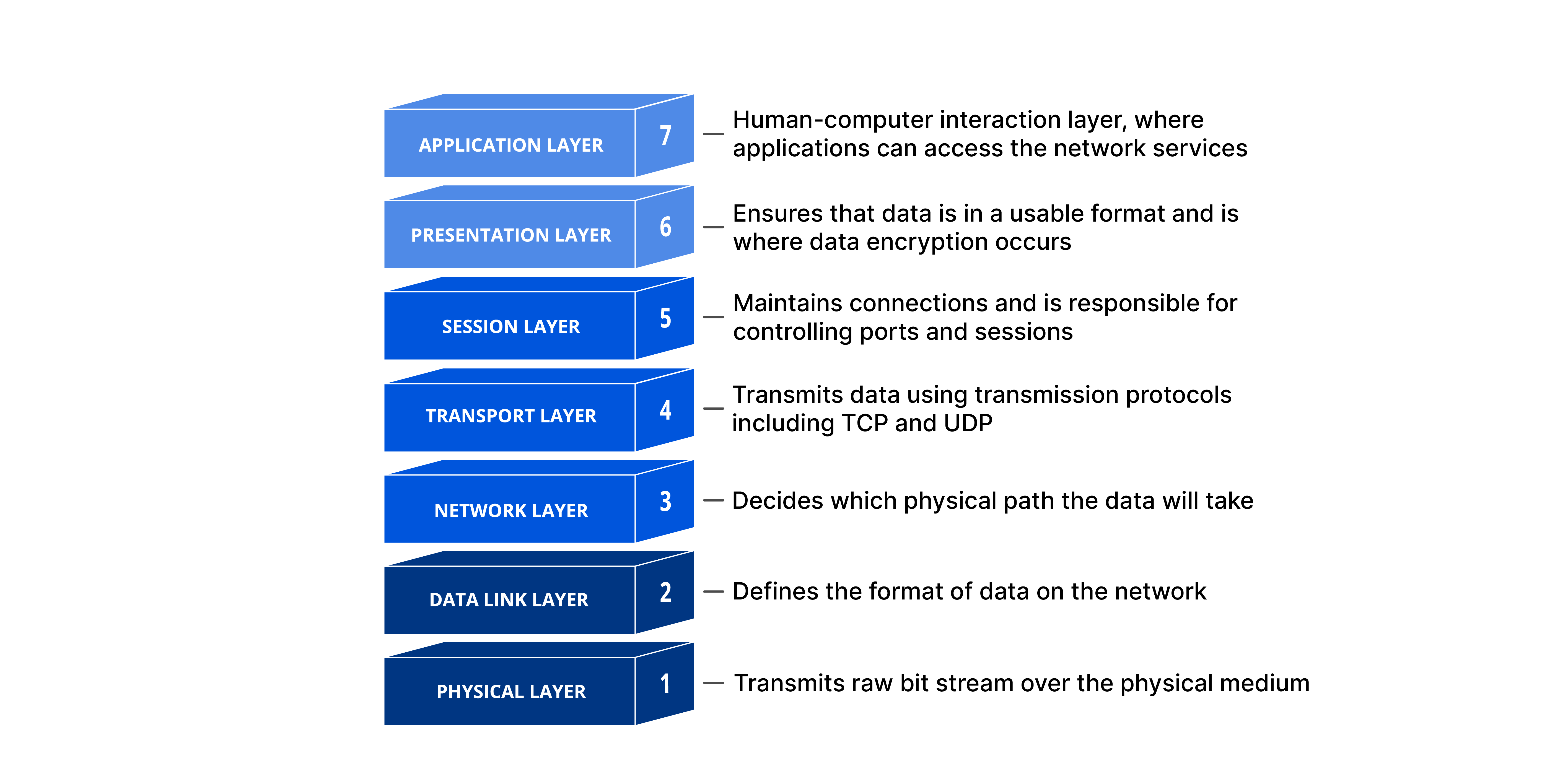 Why does the OSI model matter?

Although the modern Internet does not strictly follow the OSI Model (it more closely follows the simpler Internet protocol suite), the OSI Model is still very useful for troubleshooting network problems. Whether it’s one person who can’t get their laptop on the Internet, or a website being down for thousands of users, the OSI Model can help to break down the problem and isolate the source of the trouble. If the problem can be narrowed down to one specific layer of the model, a lot of unnecessary work can be avoided.

What are the seven layers of the OSI Model?

The seven abstraction layers of the OSI model can be defined as follows, from top to bottom:

Two communicating devices communicating may be using different encoding methods, so layer 6 is responsible for translating incoming data into a syntax that the application layer of the receiving device can understand.

Finally the presentation layer is also responsible for compressing data it receives from the application layer before delivering it to layer 5. This helps improve the speed and efficiency of communication by minimizing the amount of data that will be transferred.

This is the layer responsible for opening and closing communication between the two devices. The time between when the communication is opened and closed is known as the session. The session layer ensures that the session stays open long enough to transfer all the data being exchanged, and then promptly closes the session in order to avoid wasting resources.

The transport layer is also responsible for flow control and error control. Flow control determines an optimal speed of transmission to ensure that a sender with a fast connection does not overwhelm a receiver with a slow connection. The transport layer performs error control on the receiving end by ensuring that the data received is complete, and requesting a retransmission if it isn’t.

The network layer is responsible for facilitating data transfer between two different networks. If the two devices communicating are on the same network, then the network layer is unnecessary. The network layer breaks up segments from the transport layer into smaller units, called packets, on the sender’s device, and reassembling these packets on the receiving device. The network layer also finds the best physical path for the data to reach its destination; this is known as routing.

This layer includes the physical equipment involved in the data transfer, such as the cables and switches. This is also the layer where the data gets converted into a bit stream, which is a string of 1s and 0s. The physical layer of both devices must also agree on a signal convention so that the 1s can be distinguished from the 0s on both devices.

How data flows through the OSI Model

In order for human-readable information to be transferred over a network from one device to another, the data must travel down the seven layers of the OSI Model on the sending device and then travel up the seven layers on the receiving end.

For example: Mr. Cooper wants to send Ms. Palmer an email. Mr. Cooper composes his message in an email application on his laptop and then hits ‘send’. His email application will pass his email message over to the application layer, which will pick a protocol (SMTP) and pass the data along to the presentation layer. The presentation layer will then compress the data and then it will hit the session layer, which will initialize the communication session.

The data will then hit the sender’s transportation layer where it will be segmented, then those segments will be broken up into packets at the network layer, which will be broken down even further into frames at the data link layer. The data link layer will then deliver those frames to the physical layer, which will convert the data into a bitstream of 1s and 0s and send it through a physical medium, such as a cable.

Once Ms. Palmer’s computer receives the bit stream through a physical medium (such as her wifi), the data will flow through the same series of layers on her device, but in the opposite order. First the physical layer will convert the bitstream from 1s and 0s into frames that get passed to the data link layer. The data link layer will then reassemble the frames into packets for the network layer. The network layer will then make segments out of the packets for the transport layer, which will reassemble the segments into one piece of data.