What is shadow IT?

Shadow IT occurs when employees access and share data across unsanctioned hardware or software, exposing organizations to risk.

What is a CASB?

What is shadow IT? 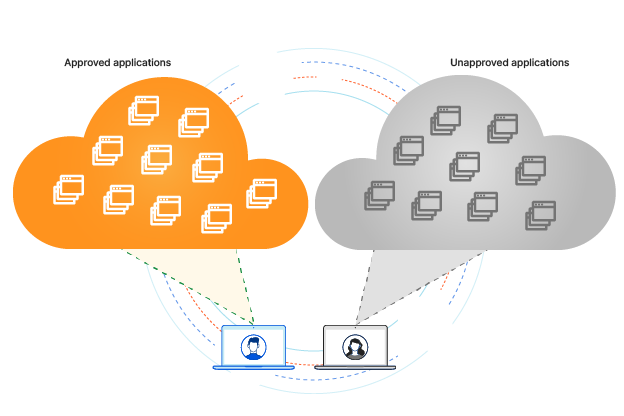 ‘Shadow IT’ refers to the unsanctioned use of software, hardware, or other systems and services within an organization, often without the knowledge of that organization’s information technology (IT) department. Unlike standard IT infrastructure, shadow IT is not internally managed by an organization.

Shadow IT may enter an organization in different ways, but typically occurs through one of two actions:

Whether the adoption of shadow IT is intentional or not, it creates serious security concerns and costs. It increases the risk of data breaches, theft, and other cyber attacks, while preventing IT teams from taking crucial steps to minimize the damage those may cause.

Why do users adopt shadow IT?

Given the myriad security risks shadow IT presents, it may seem surprising that employees choose to bypass IT approval when adopting new tools. Their reasons for doing so may include the following:

What are the risks of shadow IT?

While shadow IT may make some employees’ jobs easier, its drawbacks far outweigh its benefits. If IT teams cannot track how tools and services are used across their organization, they may be unaware of the extent to which shadow IT has pervaded it — and have no idea how corporate data is being accessed, stored, and transferred.

The usage of shadow IT also causes IT teams to lose control over data management and movement. When employees implement unapproved services or work within approved services via unapproved methods, they may be able to view and move sensitive data without appropriate oversight from the IT department. As a result of this lack of visibility and control, shadow IT may create additional risks, including the following:

How can organizations detect and remedy shadow IT?

There are several steps an IT team can take to minimize the effects of shadow IT within their organization:

A shadow IT policy helps establish protocols for the adoption, approval, and management of new hardware and software within an organization. IT departments create these policies and may adapt them according to evolving security risks and the needs of the company.

Shadow IT policies are one of several necessary steps for controlling and managing systems and services within an organization, while avoiding the introduction of any unsanctioned tools. However, many organizations still have not standardized shadow IT policies; in a survey of 1,000 US IT professionals, Entrust found that 37% of respondents said their organizations lacked clear consequences for using shadow IT.

How does Cloudflare protect against shadow IT?